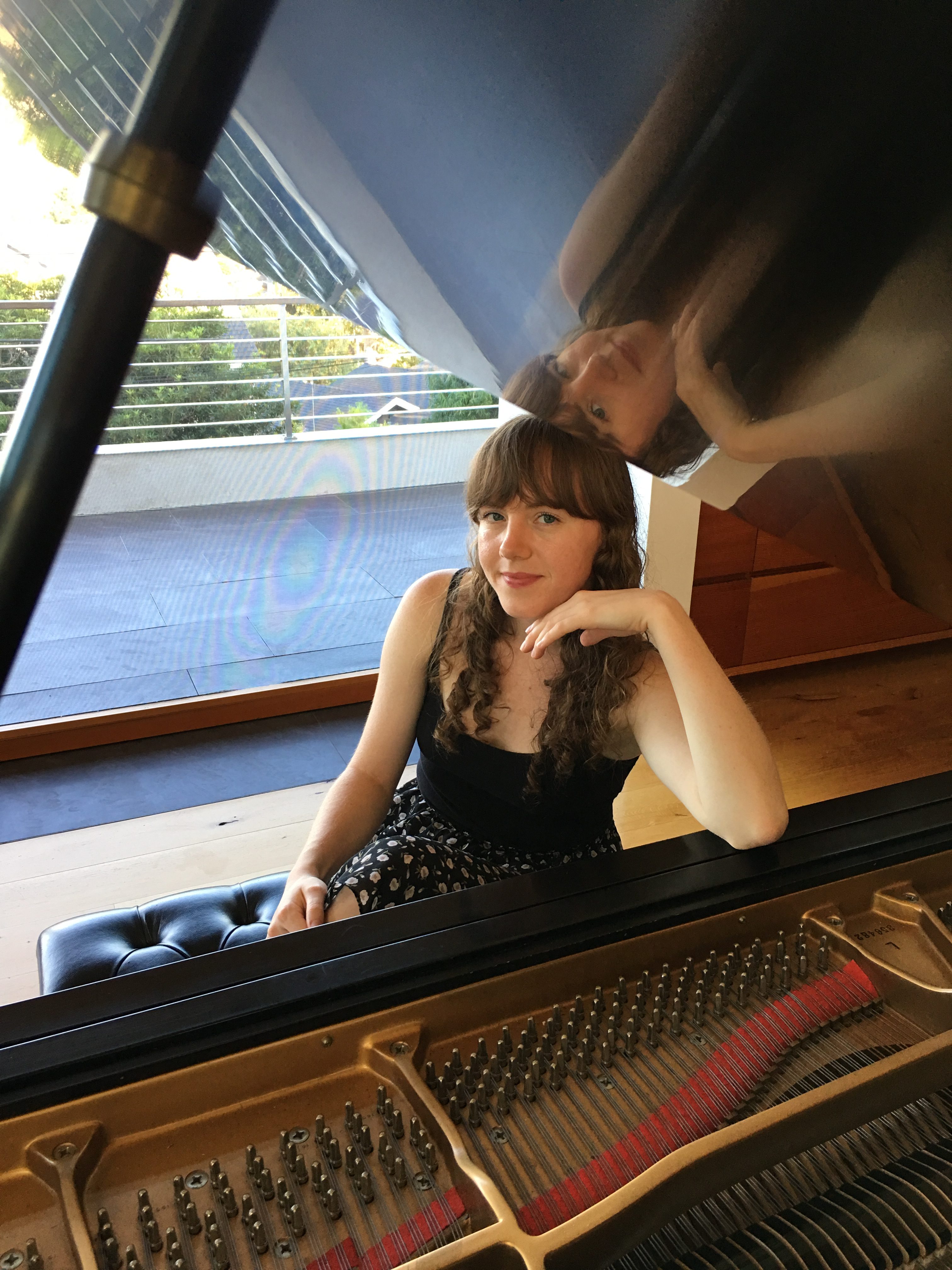 Creativity is how a person expresses themselves through both their strengths and weaknesses. I have always enjoyed tracing things in art and then sketching out my own ideas. With Musical Traces, I look for ways to “trace” musical ideas in the most literal sense. I have a strong appreciation for real tools, such as good drawing pencils. A few years ago, I participated in a program called Ryman Arts, which taught me how to work more detailed in the Classical method of art. While becoming more aware of myself, I aim to find ways to improve the strengths I have that underline the ideas behind a Classical education. Art and music are both platforms which allow me to approach my daily life with a "think outside the box" approach. By using a creative mind and being willing to step up and do things that haven’t been done by others, I have been able to allow more access to and gain better access with many new audiences. Usually, the spoken language is needed; however, it is crucial that music is understood as a universal language which provides clear ideas that the spoken language cannot.

Kaitlin Webster-Zuber (19) is a native of Los Angeles, California. She was homeschooled from 4th grade on and graduated from the Colburn Community School of Performing Arts (Spring 2018) after studying piano there for nine years under Jee Sung Kang. She also studied tap dancing with Denise Scheerer, music theory with Kathy Sawada, voice (private with Kay Montgomery and choir with Mikhail Shtangrud), and ballet. Throughout her time at Colburn, Kaitlin performed in MTAC, CAPMT, and Junior Bach festivals for piano at both local and regional levels. She was an avid participant of Colburn Chamber Music Institute (2016-2018) and still enjoys performing in Junior Chamber Music (2013-present). She served as the Los Angeles Branch Board for Junior Chamber Music Student Service Alliance (JCMSSA, 2014-15) and has been awarded numerous scholarships from JCM, including: the Costa Rica Chamber Music Festival, the Idyllwild Arts Summer Piano Intensive, the John Perry Academy Summer Piano Festival, the Montecito International Music Festival, and the Warsaw Piano Intensive. In July 2018, she was invited to the Concerto Fest Europa in Bratislava, Slovakia, where she performed solo repertoire and the Mozart Double Piano Concerto No. 10 with her sister Emily. Kaitlin frequently page turns for The Music Guild of Los Angeles, and is affiliated with their piano adoption and outreach performance programs. She participated with the Salastina Music Society, in their Sounds Promising and Promising Composers programs (2018-19). In April 2019, Kaitlin premiered her piano trio, Rhapsody, performed by the professional musicians of Salastina and her sister. Kaitlin and Emily will continue to work with Salastina in the 2019-20 school year. She studies composition with Professor Ian Krouse (UCLA), and currently attends UC Santa Barbara, where she is pursuing a Bachelor of Music in Piano Performance. Her passions include drawing, cooking, and spending time with family and friends. Kaitlin’s solo and chamber music experiences inspired her to establish student outreach concerts, programs which combine Classical music with other artistic forms such as art and dance, as well as more intimate house concerts – all of which lead her to co-found Musical Traces with her sister Emily.

Music is a powerful tool…Music is used for storytelling, healing, and to express disturbing times. I've always had a fascination with how strong of an impact music can have on all living things—from my pet cats who enjoy sitting on the piano bench while I practice, to the birds who fly by and sing along to my pieces, to the children who are intrigued by each different key, and finally to the audiences who use music to step out of their day to day realities. Musical Traces is a platform for sharing our musical appreciation–with all of our various types of audiences. Who knows, one day we may even have a concert at the Parrot Sanctuary!

Emily Webster-Zuber, 16, is a native of Los Angeles, California. She studied private piano at the Colburn Community School of Performing Arts for nine years under Jee Sung Kang. She has been studying under Professor Robert Ward since the Fall of 2018. During her time at Colburn, Emily has participated in numerous local and regional levels of competitions of MTAC, CAPMT, and Junior Bach Festivals since 2012. In the past, she has studied choir, music theory, and tap dancing through Colburn. Emily has participated in and will continue to participate with Junior Chamber Music (JCM, 2015-present) and the Chamber Music Institute at Colburn (CHMI, 2016-present). In 2015 and 2016, she participated in the Piano Intensive Camp at Colburn. After being awarded scholarships, Emily attended the Idyllwild Arts Summer Piano Intensive and the John Perry Academy at Cal State Northridge, both in the summer of 2018. In 2018, Emily was also invited to the Concerto Fest Europa in Bratislava, Slovakia, where she performed solo repertoire and the Piano Concerto No. 10, K. 365, in E-Flat Major for Two Pianos by Mozart with her sister, Kaitlin. During the 2018-19 and 2019-20 school year, Emily was invited to participate in the Salastina Music Society’s following programs alongside her sister: Sounds Promising and Promising Composers. Through these programs, she had the opportunity of performing with professional musicians for a piece by Ethel Smyth and one of her sister’s compositions. Her own composition, Pastorale, was premiered by a professional flautist and her sister. In the summer of 2019, she attended the Idyllwild Arts Summer Chamber Intensive with her sister. For the 2019-20 season of JCM, she will be taking the position of their JCM Student Service Alliance Alliance Coordinator. Emily has also been accepted as a student of the Nancy and Barry Sanders Composer Fellowship Program through the LAPhil for the 2019-20 school year. 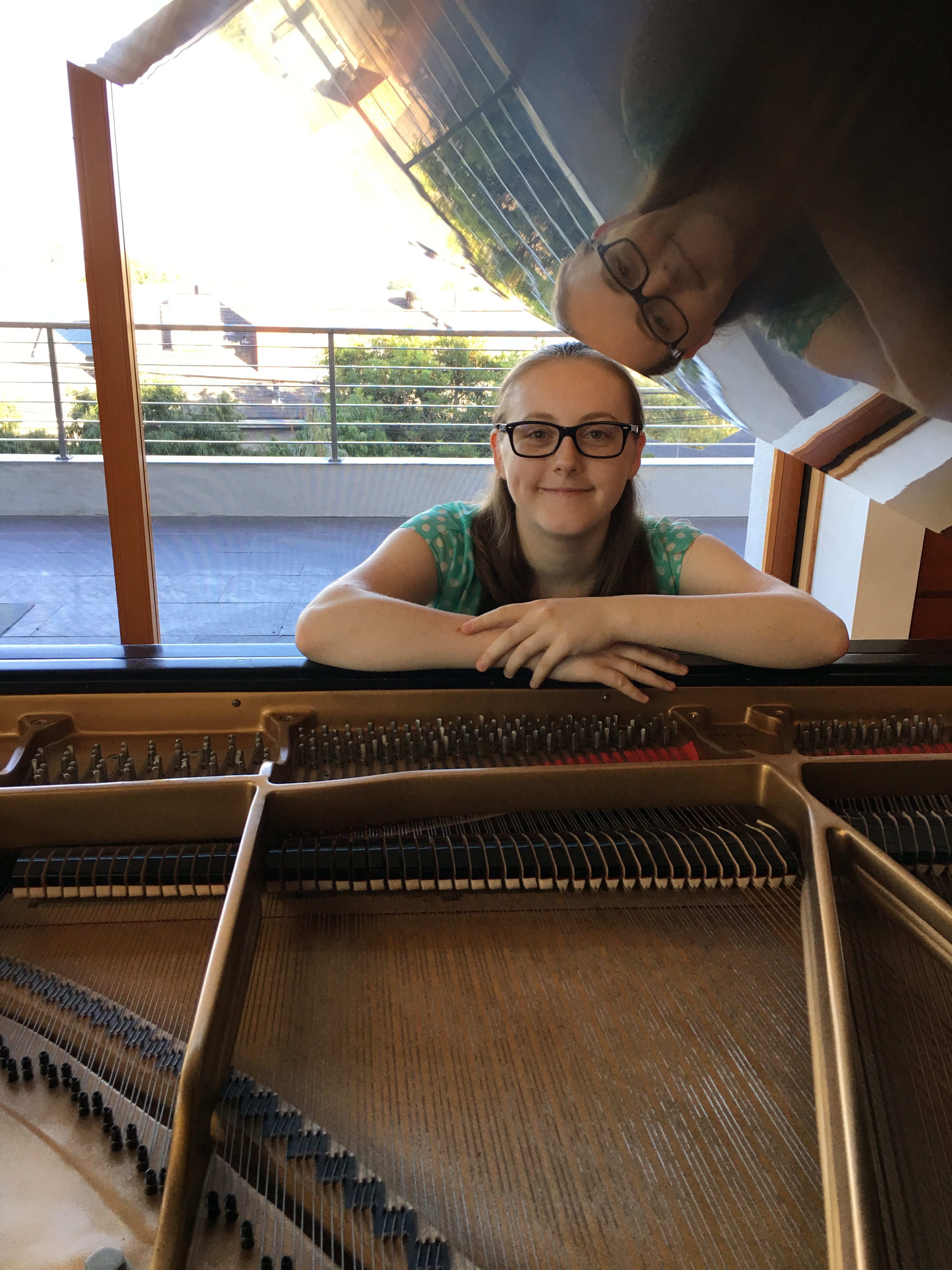